I’m back in Croatia and I couldn’t be happier!

I spent the last few days before my journey with my family in Canada visiting Niagara Falls. It was four days full of getting wet, making memories, joking, getting more wet, and oh wait… getting wet. It was mind blowing to see literally thousands of gallons of water pouring over the edge every second. Here are some photos from the trip. 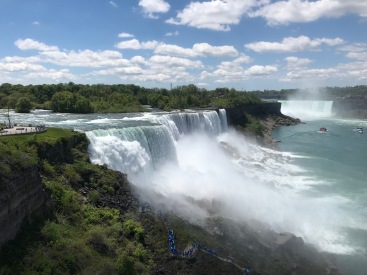 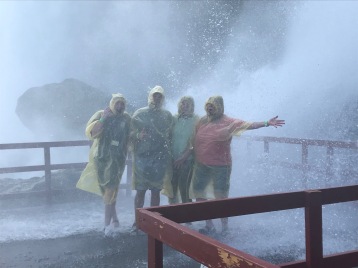 On the journey from Canada to the U.S. to Belgium to Croatia I experienced the provision of God. I left on a 7:30 flight from Buffalo only to have to wait 8 hours in Newark Airport. My Dad graciously offered to reach out to a friend who could get me access to the United Club while I waited for my next flight. All 8 hours of my stay were used to work on FIM Applications, school work, and communicating. At the end of my time in the United Club I went out to find my flight and was informed that I was seated in United Premium Plus which was a lovely big, comfortable seat next to the most entitled woman I had ever met (it’s always the way). Even from the moment I sat next to her she began looking down on me because of how young I was. While I was thinking about the blessing I had been receiving that day, the lady rudely asked the flight attendant a poignant question about the desert that she saw me eating (she was in the bathroom while the cart came around). The flight attendant promptly answered her with “well at the end of serving everyone else we will see if there is any left.” She began to object to this answer when he interrupted with “you know, the problem with calling it United Premium Plus is that the people who buy these tickets forget that it is still economy.” That quickly made her quiet while I had to contain my laughter. God didn’t have to give me that moment of ironic laughter but he did. When I arrived in Brussels for my next leg of the journey, I was bogged down by so. much. luggage. It was ridiculous. I had one big suitcase, one small suitcase, one stuffed to the brim backpack, and a very heavy guitar case. While I rolled my stuff around in a cart I began to think through how I would get all this onto Croatian Airlines because I was expecting to have to pay for it. (Standby passengers on United get more free bags than normal passengers but Croatian Airlines allows for one checked bag.) As I wheeled my luggage (bumping into rope barriers left and right) toward the check in agent knots of nervousness formed in my stomach. When I arrived check in agent looked at my boarding pass and said “oh this is not on Croatia Airlines, it is a Brussels Airlines flight.” So off I went all the way to the other side of the airport to check in at a different kiosk for a different airlines. When I got to Brussels Airline the lady kindly asked my how many bags I had and I responded with two. I placed the big and small bag on the scale and she said “well technically you are only allowed one checked bag but I will put this smaller bag as your handbag since it is little.” Great no issues… except that I already had a massive guitar case as my handbag. I decided it was best not to mention it and continue on my way. In Brussels, I had a 5 hour lay over to think and worry about how I was going to get this guitar case on the plane. When I reached the counter to scan my boarding pass the flight attendant kindly said “we don’t allow hard instrument cases on board the aircraft, so we will have to check it.” She kindly gave me a tag and told me how to fill out the information and where to pick it up in special baggage claim when we arrived in Zagreb. I was expecting her to say “oh you already have a handbag checked, you will have to pay for this one” but she didn’t. She sent me and my guitar case down the aisle to board the plane. Did I stop worrying there? Of course not. Then my next worry was “oh no. The latches on this guitar case have been popping left and right. What if it doesn’t stay closed? How can I get a guitar fixed in Croatia if it breaks? Blah blah blah.” When I left my guitar at the end of the aisle to board the plane I thought to myself “oh well. It’s out of my control.” Indeed it was. About five minutes after all the passengers had been seated, one of the flight attendants came back and said “hello were you the one that had a guitar case?” I quickly responded yes assuming the worst. She said “well today we didn’t have a very full flight and we didn’t need as many flight attendants today so there was more room in the closet up front so I decided it would be best to bring it on board. But just so you know that is not normal and it probably wouldn’t happen if you tried it again.” OK GOD I GOT YOU. As a smile spread across my face I thanked her and God for once again showing me that I should not worry. It really is all in his hands. Why do I even bother worrying at this point?

Today I had a very busy day trying to get settled here in Croatia. I got registered at the police station as a traveler and had a very discouraging and difficult time. The lady at the police station told me that people who are visiting Croatia are only allowed to stay a maximum of 90 days per year. This was very different than the other information I had heard from everyone else saying that it was a maximum of 90 days PER VISIT. I have heard from other people that every police station tells you different things, but it is still hard to hear this when I am trying to stay here long term. Next we went to the bank where I planned to open a bank account as a student. This was again met with hard answers. I was told I need to go back to the police station to get an identification number from the government and a visa and I would need verification from my university that I was enrolled at that university. Nothing is easy when you’re trying to move countries. So now I plan to go back to the police station in a few days to find out about residency visas and how to get that process going. Please be praying for me as the difficulties of regulations and the government begins. Also be praying for my journey with FIM and the church here in Croatia.

As I learned yesterday, God is in control. He already knows what is going to happen and how it is going to happen. While it is my tendency to worry about what is going to happen, it does absolutely no good. I have to learn to “cast my anxieties on him” and rely on his plan for me. When I was with Maja and my other friend Gabrijel today guess what I saw? A Rainbow. Yep this is what he has called me to. He will get me there. I gotta keep going though the hardships because he is still there. Thank you for your continued support and prayers.

Also as a side note, I wanted to let everyone know that I set up a Facebook page for my blog. I have begun posting pictures and thoughts there that are more frequent than my blog posts. (Not every moment can be shared in a blog post, but a photograph of a ministry opportunity still deserves to be shared). So if y’all want to hear and see my journey more frequently I recommend you follow Passionately His Blog @EmilysMissionaryAdventures